Helping you grow your financial knowledge

Today’s report on personal income and expenditures shed some more insights on the state of the U.S. economy at the end of 2022 and the picture is not very positive, even thought the strong growth in the fourth quarter. What the personal income and expenditures showed that the U.S. consumer did all expenditures in October and very little during the last months of the year. In fact, both nominal and real consumption expenditures (PCE) declined in November and December while October’s print was very strong. That is, all consumption in the fourth quarter of the year occurred in the first month of that quarter.

This means that the New Year is starting on down note regarding consumption expenditures, i.e., the American consumer. The not so negative part was that disposable personal income, both nominal as well as real, remained in positive territory during the entire quarter, which meant that the personal savings rate, that is, savings as a percentage of disposable personal income, increased during the quarter after hitting the lowest rate since 2005 in September of 2022. The personal saving rate increased from 2.4% in September of 2022 to 3.4% in December.

There is high inflation. And then, there is the price of eggs!

Before we discuss what has happened to egg prices over the last year or so, we need to get some definitions straight. Inflation is not measured by what happens to the price of one good. Inflation is a generalized increase in the price level. Inflation does not mean that all the prices are going up during a period of time. Inflation means that some prices went up while some prices went down and probably some other prices did not change. However, in the aggregate, that is, summing across all the prices and averaging them out in the economy, prices increased overall.

Furthermore, some prices are more important than others because they command a larger share of incomes. That is, a rise in the price of pencils is less damaging than an increase in the prices of rentals, etc. At the same time, if the price of one good increases too much, we may be able to shy away from consuming that good so higher prices on that good does not affect us. However, there are other goods that we need to consume and that we cannot shy away from, at least not in the short to medium term.

Egg prices are not as glamorous as gasoline prices. Why? Because if egg prices are very high, as they are today, we just eat something else. However, if gasoline prices are very high today, there is little we can do about it because we have to go to work and we have to fill up and drive our gas guzzling SUVs. Perhaps one of the only exceptions regarding eggs is if you are a diehard keto dieter or a low carb dieter, which means you eat more eggs per day than anybody else, and thus it is very hard to substitute away from eggs if you remain on this diet.

Normally, food and especially agricultural products which are typically non-durable food items, often experience volatile prices due to a multitude of reasons, including weather, droughts, floods, epidemics, etc. In fact, food prices since 1958 have been, on average, 1.5x more volatile than the broader core prices (prices excluding food and energy), but egg prices have been 12x more volatile than broader core prices! 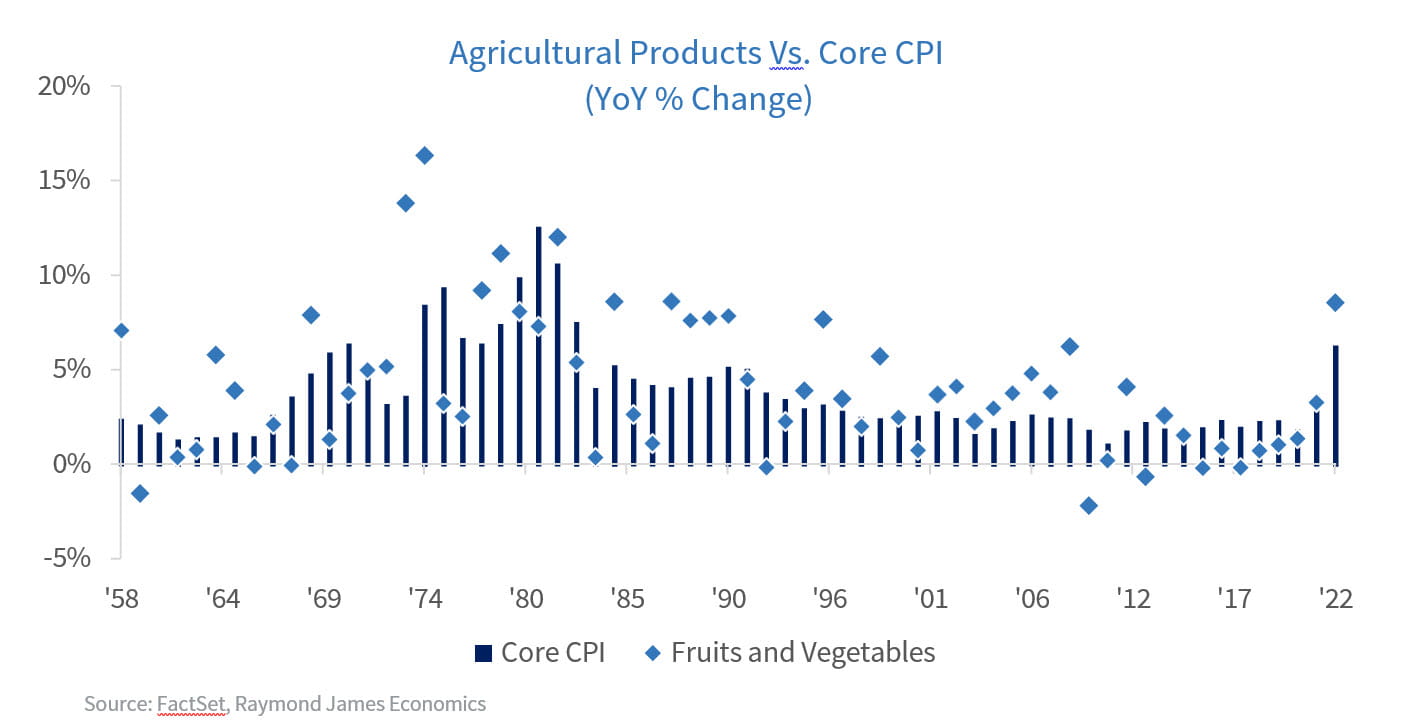 While there are arguments being made to the Federal Trade Commission that industry leaders have been engaging in price gouging, we are limiting ourselves to the fact that in 2022, approximately 60 million chickens and turkeys were killed by the avian influenza—bird flu—outbreak and this has led to a decline in production. In addition to the bird flu, we experienced soaring seed, fertilizer, and energy costs due to the Russia-Ukraine war for most of 2022, which pushed costs for farmers even higher. However, this isn’t the first time that prices of eggs have spiked more than 25% year-over-year, and just like most agricultural products, there are external factors that can be held responsible for the price increase as shown in the chart below.

Whether it was an increase in feed prices (1973, 2005), adverse weather (1989), or the avian flu (2015, 2022), the good news is that prices of eggs have not remained high after spiking. Today, we are experiencing a perfect storm with all the factors above hitting at almost the same time, and therefore the price of eggs might remain elevated for a bit longer, but ultimately should cool down.

Economic and market conditions are subject to change.

Opinions are those of Investment Strategy and not necessarily those Raymond James and are subject to change without notice the information has been obtained from sources considered to be reliable, but we do not guarantee that the foregoing material is accurate or complete. There is no assurance any of the trends mentioned will continue or forecasts will occur last performance may not be indicative of future results.

Consumer Price Index is a measure of inflation compiled by the U.S. Bureau of Labor Studies. Currencies investing are generally considered speculative because of the significant potential for investment loss. Their markets are likely to be volatile and there may be sharp price fluctuations even during periods when prices overall are rising.

The National Federation of Independent Business (NFIB) Small Business Optimism Index is a composite of ten seasonally adjusted components. It provides a indication of the health of small businesses in the U.S., which account of roughly 50% of the nation's private workforce.

The producer price index is a price index that measures the average changes in prices received by domestic producers for their output. Its importance is being undermined by the steady decline in manufactured goods as a share of spending.

Managing the rewards of a successful career
LEARN MORE